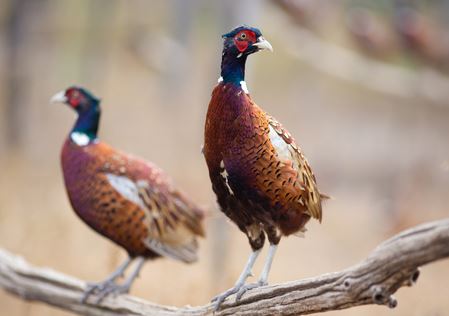 Pheasants are a well-known game bird. As with many species of birds, the females are not as distinctively colored as the males which feature a vibrant coloring of copper and chestnut brown. The head of the pheasant is a mixture of green and purple with red feathers around the eyes and a white ring around the neck. While you may already know the look of a pheasant when you see one, did you know that if you looked around the nation 400 years ago that you wouldn’t find a single pheasant?

Attempts to bring pheasants to America started in the late 1700s. However, the true establishment of a sustained pheasant population did not occur until the 1880s, when Owen Denny was appointed as consul general to China. He and his wife, Gertrude, were fascinated with the colorful birds, and he bought several birds and raised them to make them fatter than the birds found in common street markets, according to HistoryLink.org. He stated in several letters to his friends that the birds were “delicious eating … and would furnish fine sport.”

A year later, in January 1881, the Dennys purchased 60 pheasants and crossed the Pacific Ocean to return home to Oregon. The majority of the birds survived the journey across the ocean, but the subsequent trip in trains and small boats scared the birds, causing many to go into a frenzy and injure themselves seriously. As a result, only a fraction of the birds made it to the Portland area.

The Dennys tried again in 1882. This time they chartered the ship to go directly to Portland. Mr. Denny’s brother, John, released the colorful birds on the family farm and within a year, the birds had spread to neighboring counties. The first hunting season for pheasants was held in 1892 following a decade of successful advocacy by Denny to allow the population to establish and grow, and it’s said that hunters reportedly bagged more than 50,000 pheasants on opening day. In the 125 years since, the pheasant population has spread to more than 19 states and become one of the most appealing and delicious game fowl animals in the nation.

Are you interested in booking a pheasant hunting expedition in 2017? Bird hunts at Meadow Brook Game Farm are going on now through March 30. To learn more or to book your trip, call us today at 615-888-2411.