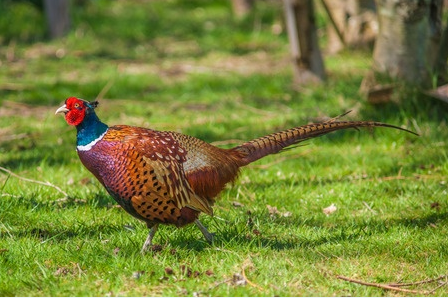 The life span of a pheasant is very short, and typically these birds only live for approximately a single year in the wild. When hunting these birds, understanding their life cycle and the periods that it consists of can help to make sure that your hunting trip is a success. Let’s explore the general patterns of behavior that are a part of the wild pheasant’s life.

Typically lasting from mid- to late March all the way to mid to late June, the nesting period for pheasants is when roosters attract their hens. From there, they will find their own little territory and build their nests, with the hen then laying about one egg each day. After being incubated for about 23 days, the eggs begin hatch.

The brooding period runs from around mid-June to September, and is when the hatchlings begin to mature and grow. For about two and a half months, the mother hen will escort the newborn hatchlings into fields near the next for these young birds to feed on insects. Generally mothers and hatchlings stay within 10 to 20 acres of home for the first few weeks, eventually venturing as far as 70 acres or more from home by the time hatchlings are fully grown at around 21 weeks of age.

From September to November, pheasants will begin to forage for the winter months ahead, working to fatten up to make it through the cold season. They birds take to open fields and dine on as many insects, grasses, seeds and grain as possible, with their bodies’ metabolisms quickly converting the eaten carbohydrates to fat for survival in the cool and snowy months. This is also the peak time for pheasant population growth, as the youngest birds join the preparations for winter with any older pheasants that have survived the nesting and brooding seasons and are preparing for their second winter.

Fall hunting seasons start in September, coinciding as well with when other predator animals begin their winter preparations as well. Pheasants, thus, are highly sought after by both man and beast during the fall months, and work to fatten up while avoiding the gaze of hunters and predatory animals alike.

The survival period for pheasants runs from November all the way to February, and hunting season runs through this entire period, as well, ending in March. During this time, many pheasants will not be able to survive and will die off from the cold. Others will seek out better shelter or food, but with a scarcity of food during this time – and the still-seeking eyes of hunters and of foxes and other wild dogs and wildcats – many of them to do not survive to see the following spring.

Meadow Brook Game Farm is a shooting preserve in Westmoreland, Tennessee, and offers guided hunts for chukar, quail and pheasant. Our guides will take you to the best spots on our more than 1,200 acres, ensuring that you don’t return home empty-handed. For more information or to book your trip to our guided game farm, call us today at 615-888-2411.