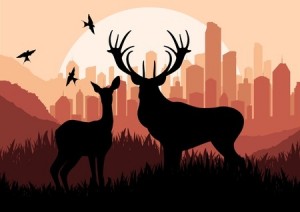 When thinking about hunting in Tennessee, there are many areas to cover. As being one of the best hunting areas in the entire country, this comes with the territory. Whether you’re looking for pheasant or quail to hunt, the state has you covered and in particular us at Meadow Brook Game Farm.

However, there are other animals to hunt in Tennessee, including deer, but you might have to be innovative in terms of tagging them. We have a question for you: When you hear the term ‘urban deer hunting’, what do you think of? What images go through your head? It sounds a little apocalyptic, doesn’t it? That the city has fallen apart and there are animals everywhere, but urban hunting is a fact of life nowadays in certain areas of the country and Tennessee is no exception. Newsmax does a good job of breaking down this urban deer hunting phenomenon in Tennessee.

In this article, Rhi Etzweiler talks about the intelligence of deer, how they know what areas to migrate to during hunting seasons. In other words, they are experts in recognizing behavior patterns. He writes, “Quite often this means deer herds migrate into urban areas during the hunting season, where they know they’ll be safe.”

Deer are indeed crafty but it is important to counteract this craftiness to stabilize their population growth. Many hunters are venturing into urban areas to take care of the problem. That said, hunting in a more populated area is more dangerous than hunting in the emptier outdoors. Etzweiler writes, “Hunters should take the time to verify local ordinances and contact the TWRA for explicit assistance in determining legality, should landowner permission be acquired.”

Before starting an urban deer hunt, you need to make sure you comply with rules. The last thing you want to happen is hurting yourself or others because you didn’t know the rules. For more information on such rules and regulations, check out that Newsmax article.