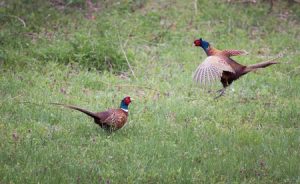 Aren’t quail and pheasant the same animal? Well, they’re closely related, but they are, indeed, different from one another in several ways. In fact, they have different sizes, colors, plumage, diet and habitat

First, consider quail, which is a general term that encompasses some 29 species! Generally, quail are short-in-height game birds known for their round and plump bodies. Typically, their average length is about 10 inches and they weigh about 8 ounces. When it comes to colors and plumage, there are all sorts– from blue-grey with plumage to brownish white without plumes…

Next, consider pheasant, a generic term that happens to include some 49 species. How are they different from most quails? Well, pheasants are larger, more colorful and long-tailed. They have short, rounded, and curved wings with strong, long legs and four-toed clawed feet. If they sense danger, they can fly for short distances when needed.

Want to hunt quail and/or pheasant? You can do so at Meadow Brook Game Farm, a 1,200-acre shooting preserve in rural Tennessee, one hour north of Nashville. Located in Westmoreland, TN, Meadow Brook Game Farm has been in operation since the 1950s. Hunters come from near and far to bag quail and pheasant at this top-quality hunting preserve. With no bag limit, it’s an ideal hunting destination for those interested in game birds.

Whether you want to have a family hunting outing or do some corporate team building, there are morning and afternoon hunts available with no mixed parties so you’re not stuck with people you don’t know at all. Guided hunts with dogs help make it a “guaranteed hunt.” Please call Meadow Brook Game Farm for details: 615-888-2411.