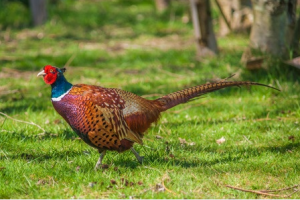 Most people assume pheasants have been in America for centuries, but the truth is they were first introduced in the late 1700s and didn’t really begin to propagate until the early 1800s. Originally, settlers from England brought pheasants with them to New York and New Jersey, though those “early birds” weren’t strong enough to survive. Later on, in 1881, the Chinese ring-necked pheasant, brought over from Asia, got released in Oregon. A government official named Owen Denny imported them from Asia (specifically Shanghai, China) to America and they eventually did flourish in the Willamette Valley of Oregon and then into the state of Washington. Meanwhile, other people from Europe brought pheasants over the ocean. These birds were typically brought from English game bird farms, and soon they were being released all over the United States.

Today, in 2022, you can expect to see pheasants in about 40 of the 50 states. Their ancestors either came from Asia or Europe. Today’s birds spend the majority of their time on the ground in fields, farmlands (with brushy cover), woodlands and some wetlands. The number of pheasants in the U.S. peaked during the mid-1900s, but then declined when agricultural practices took over their land and/or urban development encroached on their homes.