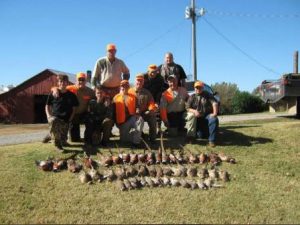 At Meadow Brook Game Farm in Westmoreland, Tennessee, just north of Nashville, you can try your hand at bird hunting and see if you get a quail or pheasant. Now why hunt birds rather than, say, deer?

Well, if you’ve ever spent a whole day sitting in a blind waiting to shoot a deer, you know it can get boring. There’s more excitement to hitting a flying bird compared to a buck that’s just standing there, eating an apple on the ground. There’s a lot of downtime for hunting deer where a hunter could just listen to music, read a book or even sleep. That doesn’t sound like hunting, does it? With birds, there’s just more action and excitement.

Easier on the Senses

How about smells? Deer camp doesn’t always smell so good. Between the deer urine smell and/or skunk spray hunters put on their clothing and farts and beer, deer camp can stink!

One of the nice things about hunting birds is you can talk out loud with your fellow hunters when birds aren’t around– and then, when they are, get quiet. However, with deer hunts, you’ve got to be quiet most of the time for fear of spooking an unseen buck.

You can’t take dogs with you on a deer hunt, but you can when you’re hunting birds. In fact, most bird hunters want dogs with them since they can help out so much, from companionship to bird retrieval.

At Meadow Brook Game Farm, there are 1200 acres and no bag limit. So if you want to shoot as many game birds as you can, have at it. Whether it’s just you and a friend or a big group of people, Meadow Brook Game Farm offers game bird hunts that’ll satisfy all sorts of people as they hunt for pheasant, quail and chukar. Call 615-888-2411 for more information.