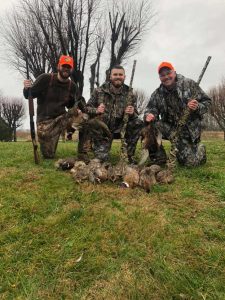 People come from near and far to Meadow Brook Game Farm in Westmoreland, TN, to hunt birds like pheasant and quail. What kind of gun is best for bird hunting?

Consider using a shotgun to hunt birds. Shotguns fire numerous small pellets (or shots) at once, released from the shotgun in an expanding cloud which helps increase your chances of hitting moving birds. Generally, shotguns come in different gauges, and the gauge measurement refers to the interior diameter of a shotgun’s barrel. Interestingly, the smaller the gauge, the bigger the interior diameter of the barrel, and the more shot(s) the gun can fire effectively. So, you might like to use a 12 gauge shotgun for bird hunting at Meadow Brook Game Farm, or perhaps a 20 gauge or 28 gauge. Each hunter seems to have their own personal preference. With a typical range of 40 to 50 yards, shotguns are an effective gun to use for hunting birds.

If you’d rather use a rifle than a shotgun, that’s an option in some cases, too. Rifles fire single bullets at a time. They come in different calibers such as .22LR, .30-06, .470. Caliber refers to the nominal internal diameter of the gun barrel bore, measured in hundredths of an inch. With a rifle, you get a range between 20 and 250 yards (or more). Is a rifle appropriate for bird hunting? Not really! Some states allow you to shoot upland birds with a rifle, though all states prohibit rifles when hunting ducks, geese, waterfowl and migratory birds.

So, it’s back to shotguns then… There are four types of shotguns. The cheapest are single shots with a single barrel holding a single shell. You have to break it open to reload it each time. Kids often start out using these. Next, there’s pumps and semi-automatics. Now these are ideal for bird hunting! They fire one shot when the trigger is pulled, but unlike single shots, they hold multiple shells. Better yet, they reload with either a manual pump from you or on their own using a recoil/gas-driven system. Finally, there are double barrel shotguns– they’re good for upland hunts and waterfowl, but can be very expensive.

Ready to do some bird hunting? Call Meadow Brook Game Farm to discuss and plan your visit– the number is 615-888-2411.