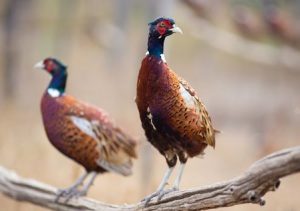 What’s the most popular upland bird to hunt? If you guessed pheasant, you’re right! Hundreds of thousands of hunters go after pheasants in the fields, especially during the colder months of the year.

Pheasants Came to America in the 1880s

Pheasants came to America by way of a man named Owen Denny who brought some over from China back in the 1880s. The first pheasant hunt in America was said to be in 1892 in Oregon. They have since flourished in America thanks to a favorable habitat and stocking programs conducted over many decades. It’s no wonder, then, that they’re become one of the most hunted game birds in the USA. They’re plentiful, beautiful and fun to hunt.

Pheasants Are Creatures of Habit

Back in 1985, the United States’ Conservation Reserve Program set aside a portion of crop fields in native grasses in order to protect the environment and reduce soil erosion. This gave the pheasant population a place to live and grow, such that pheasant populations really exploded. Though they can fly, pheasants prefer to stay on the ground. They are non-migratory birds. They usually start their day among heavy cover (like drainages) where they have roosted overnight. Then it’s time to move to grain fields to pick up grit to help digest food. During the day, it’s feeding time– they’re out looking for food. Then they return to cover before sundown. Pheasants have a routine and it’s only disturbed when the weather is extremely cold or rainy. Just like humans, they’ll stay under cover during cold and rainy times.

Hunting for Pheasants in Tennessee

Most hunters take dogs with them. The flushing or pointing dog is able to find pheasants by picking up their scent.

Do you want to hunt pheasant in Tennessee? Meadow Brook Game Farm offers guided pheasant hunts (with dogs). Check out this webpage for detailed info about hunts.

Meadow Brook Game Farm is located in Westmoreland, TN, about an hour north of Nashville. Please call 615-888-2411 for more info.