Big things are happening in the Tennessee quail hunting world. Quail Forever, a national group dedicated to the protection and maintenance of wildlife habitats, has gained a new chapter. The formation of the Upper Cumberland Chapter of Quail Forever brings Tennessee’s total number of chapters up to ten. Tennessee’s ten chapters already have 1,122 members… Read more » 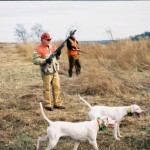 Pheasant, quail and chukar hunting in Tennessee is not a totalitarian experience; it is quite the opposite, especially at Meadow Brook Game Farm! Although hunters may not think of one of their favorite past times as a democratic, politically-charged activity, it is when it comes to the surrounding community and government. Every year, new regulations… Read more »

There are plenty of birds still, swirling through the skies like some avian snowstorm. We have had a terrific season at Meadow Brook Game Farm – the pheasant, quail, and chukar hunting have been great. There have been many happy hunters. The season, however, is nearing its end in mid to late March. I cannot… Read more »